Originally from London in England, Andrew now lives in St Cyr les Champagnes France. Andrew started singing at the age of five. Between five and sixteen, he won more than thirty regional and national singing awards. At the age of eighteen he was accepted as a scholar at the Royal College of Music in London where he was fortunate enough to study with Lyndon Van der Pump F.R.C.M. who was then vocal director and Richard Nunn rehearsal at Covent Garden and accompanist for Jessye Norman. The two teachers inspired Andrew to search deep into the role to find the real performance. In 1982, Andrew got the chance to study for a while with Tito Gobbi, without a doubt, one of the greatest actors in the world. Here Andrew learned the true art of performing. Andrew qualified both as a teacher (A.R.C.M.) and as an interpreter (Dip, R.C.M.).

leaving the Royal College of Music, Andrew began to build his career with concerts in England, Germany, Norway, Sweden, Belgium and Holland, opera, oratorio and his greatest German song. In 1990 Andrew joined the UK touring company of Musical "Chess" touring for two years throughout England, Scotland and Wales. Sadly, in 1992 Andrew was forced to stop singing due to illness. That didn't stop Andrew from continuing to work in the theatre. For eight years Andrew was the Stage and Group Director of a professional traveling theatre company which specialized in touring Shakespeare on the grounds of grand mansions in the UK and Europe. It was not until 2012, with the help of the Royal Brompton Hospital in England, that he was able to resume singing. In 2016 Andrew created Baron Opera, a company specialising in bringing classical song and opera back into our daily lives, creating his "one man shows", "The variations of the life of a baritone" and “The heroes and villains of the opera", plus "The evenings of the grand opera", in collaboration with Chorale Diapason, all of which have been very well received, with concerts in France and England. Baron Opera is now in its fourth year and, despite the setbacks of 2020, is moving from strength to strength. Next year, as well as continuing to develop the classical repertoire, the company is looking to diversify into the world of the comedy musical. Look out for next year’s developments on our website. Andrew is also the conductor of the Ayen pop choir. Andrew is also a singing teacher and teaches from home in Saint Cyr les Champagnes.

At the moment, Andrew and Hélène are working together to create a music program especially for medical, social or hospital environments that can be adapted to the needs of an individual or for groups. 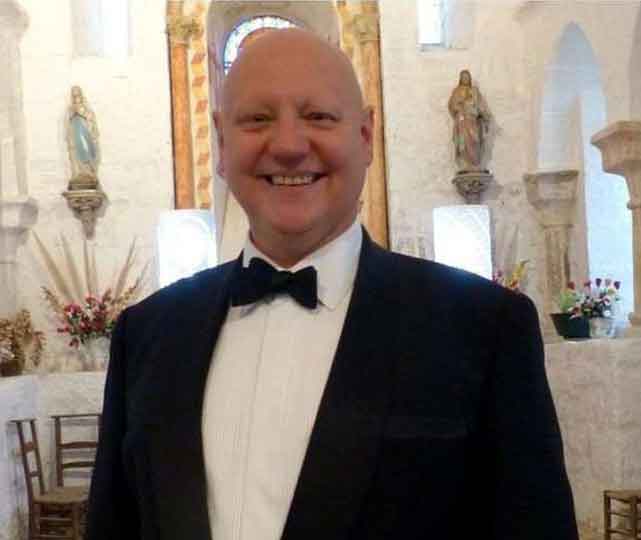